Like many of us IPv6 advocates, I regularly visit Google IPv6 Statistics Page. Some have noted that over time, the increase of IPv6 users have tapered off, and others have predicted that IPv6 usage will not increase beyond 30%.

One can attempt to infer much from Google’s statistics, not always correctly. When I look at the graph, I see a little bump around the Christmas Holiday period. I’d like to think that is because people are at home more (taking time off the during holidays), and using their home IPv6-enabled connection, rather than their work/enterprise-ipv4-only connection to access Google. But even if my reason for the bump is wrong, it is clearly there, and one can see it for each of the years going back as far as 2013.

Size of the Internet is still growing

But just looking at Google’s stats doesn’t tell the entire story. It doesn’t show how the internet is continuing to grow. Another statistics site, Statistica.com, estimates the number of world wide users, where it can be seen that the size of the internet continues to increase. 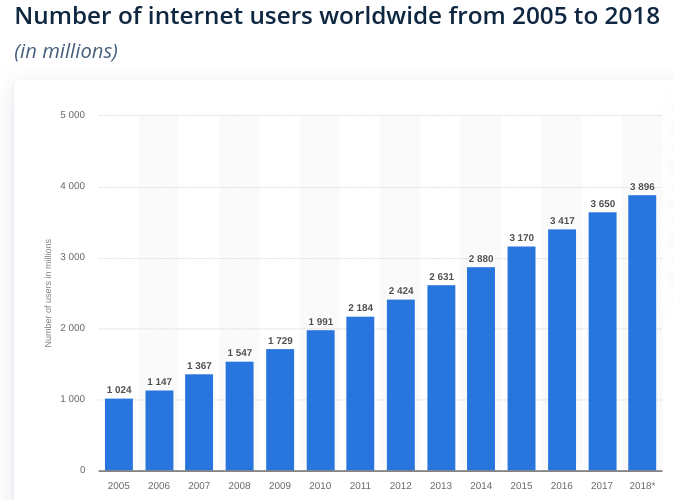 Looking at the graph above, one can see a rather linear growth to the number of internet users in the world.

Because IPv4 Address space is limited to 4 bilion (2^32=4 billion), the growth in the internet will have to use IPv6 address space.

So what does the growth of IPv6 enabled users look like? What if we combine the data, looking at the Google Data for % of IPv6 Users, with number of Internet users.

Is IPv6 running out of steam (reaching an asymptotic line), or does it continue to grow? 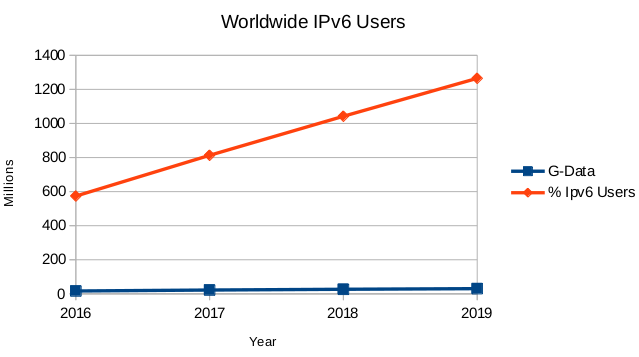 As you can see from my simple graphing abilities (thanks to LibreOffice) that although the Google data appears to show the rate of IPv6 adoption is decreasing, the combined data shows that the number of people using IPv6 in the last 4 years have doubled!

As John Curran, CEO of ARIN, said back in 2017, IPv6 will not take over overnight, in fact, there will be a “long tail” of IPv4 usage. But as you can see from the combined data, the millions of IPv6 users continues to grow, as the Internet grows. In fact, the number of IPv6-enabled users today exceeds the entire Internet population in 2007.

If you are IPv4-only today, you will have to rely on someone else’s translation mechanism (NAT64/DNS64, XLAT464, etc) for those millions of IPv6-enabled users to reach your website. Translations services you have no control over. This means it will take longer for your pages to load, when compared to your IPv6-enabled competitors. Google, Amazon, and CDNs have shown that longer load time translates directly to reduced revenue (how long will your customers wait for your page to load?).

It is 2020, the beginning of the IPv6 decade. It is not too late. But it is time to get connected to the IPv6 Internet and reach those 1.2 Billion users out there who are already using IPv6 today!