Everyone knows (by now) that IPv6 is an 128 bit address. And most know that the least significant 64 bits is the Interface ID (IID). That is 2^64 or 18,446,744,073,709,551,616 hosts per /64 prefix (think: subnet). But no one expects we will fill networks with that many hosts per prefix. IPv6 prefixes are part of the mind-change from IPv4, where subnets are tightly packed with hosts, to sparsely populated prefixes.

But what if a host occupied all of the addresses in a /64 prefix? We all know that IPv6 hosts typically have more than one IPv6 address per interface. But can an interface have 2^64 addresses?

Well, probably your OS won’t allow anywhere near that number of addresses. But with a relatively simple Python program, a lowly Raspberry Pi can listen on all of those addresses simultaneously.

This summer I discovered ipv6board, a project run out of Sweden running on a Raspberry Pi streaming a short SMS style message that anyone can write to. You can view the Raspberry Pi display at ipv6board.best-practice.se (unfortunately, the author is having a problem the streaming video part, and may be off-line) 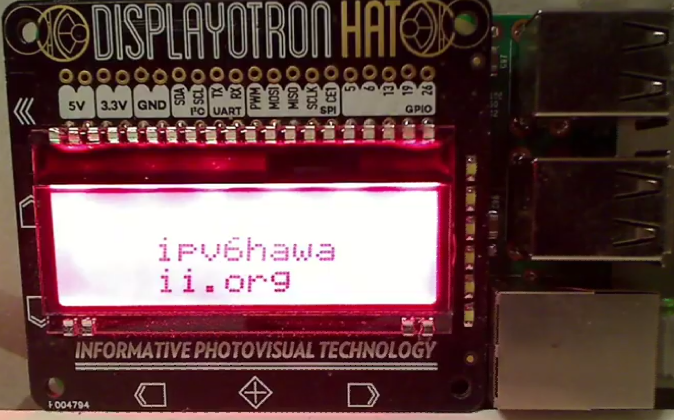 This is all fun, but converting text to ASCII by hand becomes tiresome fairly quickly. I thought, why not have a computer do the ASCII conversion, and pop those 8 bytes into an IPv6 address and send it off to the IPv6Board.

I decided to write a conversion program in shell script, because I wanted it to run everywhere (even on my OpenWrt router). The script takes a message argument, converts it to ASCII, and then pings the ipv6board.

Run it multiple times (with different messages) to fill the screen of IPv6board. ipv6board.sh is open source and hosted on github.com/cvmiller/ipv6board.sh.

How much address space do we need?

Clearly, 8 bytes is too small to write tweets. Perhaps the version of IP after IPv6 will have even more bytes so we can write a haiku poem. But for now, enjoy the Summer Fun with IPv6 today.