ARP is a funny protocol, as it isn’t part of the IPv4 suite, but IPv4 will not work without it. The creators of IPv6, were looking for an inclusive method (e.g. part of the IPv6 protocol) to accomplish MAC Address resolution. They chose to use ICMPv6, which is a Layer 4 protocol.

But how does one use a Layer 4 (L4) protocol to resolve Layer 2 (L2) information (the MAC address) when both L2 and L3 information is needed before the packet requesting Address Resolution can be sent?

To answer this question, some special L3 addresses had to be created. The first is the Link-Local address, a non-routable address limited to the scope of the link (think broadcast domain), and always start with FE80.

The second involves multicast. Since it was decided that broadcast wouldn’t be used in IPv6 (since every end-station must listen to broadcast), a few special multicast addresses would be created.

In the early days of IPv4, duplicate addresses on the network was easy to do, since there was no automatic way to get an address (pre-DHCP), and addresses were manually entered. Creating a list of used addresses was quite common, some even used MS Excel. After DHCP had been created, duplicate addresses seemed like a thing of the past. But then VMs (Virtual Machines) came along, and cloning VMs became common. A clone which included the MAC address, would get the same IP address from the DHCP server as the original (one reason why DHCPv6 does not use a simple MAC address as an identifier).

But back in the early days of creating IPv6, there was no DHCP, and the creators wanted to improved upon the situation by creating Duplicate Address Detection (DAD).

Because IPv6 nodes can create a globally unique address (GUA) without contacting any servers, using SLAAC (StateLess Auto Address Config), DAD becomes important in preventing duplicate addressing. When a node forms its GUA, it sends out a Neighbour Solicitation (NS) message to its own Solicited Node Address, similar to a gratuitous ARP in IPv4.

But the key difference from ARP is that if there isn’t a duplicate address on the network, no other host will hear the NS message. Why? Because no other nodes are listening to that specific multicast address, where as ARP requires ALL nodes to listen.

Part of knowing the neighbourhood, is knowing what routers exist on the link. Communication with routers will use another special mutlicast address FF02::2.

As a host becomes active on the network, it will send Router Solicitations (RS) to the All Routers address. The routers on the link will then respond with Router Advertisements (RA), which include important bits of information, such as default gateway, prefixes defined on the link, even DNS servers.

On a network (shown below) where there is more than one router on the link, the default gateway router (e.g. the Production Router) may send a Redirect to host (DNS Server), stating another router (Test Network Router) on the link is a better path. The Redirect will also include the link-local address of the better path router. 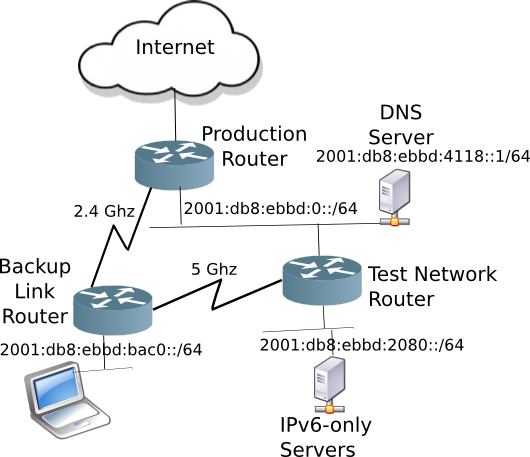 Since on the average network, only one host will be listening to the Solicited Node Multicast Address, the Host B will respond with a NA which includes the destination MAC address ***.

After receiving the destination MAC address from Host B, Host A can send an IPv6 packet to Host B.

ND uses the following ICMPv6 message types to discover what is happening in the neighbourhood:

Because ND uses ICMPv6 extensively, the quickest way to cut yourself off of the internet is to block all ICMPv6 traffic on your firewall. Although this is common in IPv4, resist this temptation. ICMPv6 messages are required to remain connected in IPv6.

If you want to learn how IPv6 really works, check out this free eBook (PDF). It is an excellent Cisco Press book published in 2013. It may not have the latest RFC references, like RFC 8200 (the IPv6 Standard RFC), but it is still a good read. The second edition is even better (but not free)

*** Of course, it is possible that the last 3 bytes of the IPv6 address will match that of another host on the network (a 1/16 million chance), but multicast will prevent the rest of the hosts on the network from hearing the idle chatter, unlike ARP.