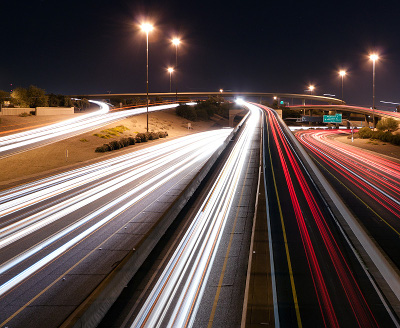 In a small network of more than one router, one will quickly figure out that you can’t get there from here, even with DHCPv6-PD (Prefix Delegate) providing IPv6 addressing,. Sure you can get to the internet, but you can’t get to other parts of the network which are behind the other routers. You need a routing protocol to share information between the routers on your small network.

How to Get There?

So when we all have /56s or larger delegated to our house/SOHO, and we put in multiple IPv6 capable routers, how will the routers convey connectivity information? Well we could use HomeNet RFC 7788, but currently home routers don’t come out of the box configured for HomeNet (for example the Wifi is on the same subnet as the LAN). Not to diminish HomeNet’s work, but there is a forgotten protocol that can solve the problem.

RIPng (RFC 2080), the IPv6 cousin of RIPv2  RFC 2453 , has all the advantages of RIPv2, except it conveys IPv6 route information (rather than RIPv2’s IPv4-only info). But the same principles apply, easy to deploy, works pretty well, solves the problem (of distributing routes to multiple routers).

But finding support, and documentation on RIPng on the internet is threadbare. Even the venerable BIRD (BIRD Internet Routing Daemon) has a non-functional example configuration, not to mention they just call it RIP confusing whether it is for IPv4 or IPv6.

But why has it been forgotten? Because real men use OSPF (or IS-IS). And you can too, if you want to spend a week (or more) learning the complexities of the protocol. But what if you just wanted it to work, and move onto the next problem.

Getting from here to there

Although some ISPs will give a fairly stable prefix (via DHCPv6-PD), others do not, leading to a very dynamic prefix environment at home or the SOHO (see Request: Less Dynamic Prefix, Mr./Ms. ISP. Cascaded routers can further divide the /56 via DHCPv6-PD allocating smaller chunks downstream. If one only needs to get to the internet (everything is in the cloud, right?), this works quite well. After all each cascaded router has a default route pointing upstream (towards the ISP).

But what if you have your NAS on Network B, and you client on Network C, it isn’t going to work. 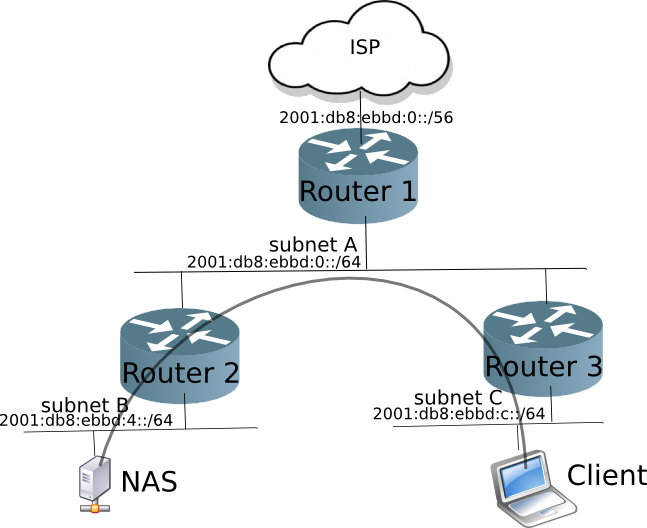 Router 3 doesn’t know about Router 2, or even the subnet B behind Router 2

Of course, you could put in static route in each of Routers 2 & 3. But not only does that take a bit more knowledge of routing (hint: the next hop is a link-local address), but it doesn’t work in a dynamic prefix (where the ISP is changing the prefix) environment.

So, enter an easy to configure, easy to use routing protocol, RIPng. Running RIPng, Routers 2 & 3 can share information about themselves, and more importantly, the subnets they are serving. If the ISP changes the prefix, DHCPv6-PD will propagate the new prefix down to the cascaded routers, and RIPng will refresh the routing information between the routers, all automagically.

First, use router software that supports RIPng. Of course Cisco supports RIPng, but not everyone has multiples of these at home. OpenWrt/LEDEis a good option, since if your router is not over 5 years old, it is probably supported. And it has BIRD as an easy to install package.

First, install bird6 & birdc6 (the CLI for bird6). The bird6 package is a direct port from the bird maintainers, and therefore uses its own configuration file (rather than UCI). But RIPng is easy, so onto the next step.

Uncomment the following lines in the package-provided configuration file /etc/bird6.conf

Even though RIPng does not require a “router id” bird6 won’t run without it. Restart the bird6 daemon with /etc/init.d/bird6 restart, and you are done*

Of course you could optimize it a bit by telling the config which interfaces to use, such as interface "eth1" {mode multicast }; but this article is about making it easy, and it doesn’t break anything sending route updates out the other interfaces.

How to tell RIPng is working

ssh to the router. The birdc6 CLI is the easiest in showing the routing table, which includes sources of the routes, like this:

All those “rip1” lines are routes learned from RIPng. Since no filters were used, not only are the globally unique addresses shared, but so are the Unique Local addresses (ULA) configured in each router. Here’s the fun part, even though there is not ULA on subnet A, RIPng provides connectivity between the ULA islands. Of course, it would be better to have a single ULA /48 for the entire network, but this is a test network, and OpenWrt/LEDE creates a ULA by default for each router. I wanted to see how RIPng would handle this non-optimal situation. And, it handles is pretty well.

While it is possible to figure out who the other RIPng routers are, it is easier to use the bindc6 command:

RIPv2 included authentication, to ensure that the routing updates that are being received, are from the correct sources.

Of course, if you creating a network with IPv6 and more than one subnet, don’t forget the DNS. Have each router forward DNS requests to your local DNS server (you do have a local DNS server, right?).

Now all your IPv6 addresses will have names, and it will be a breeze getting around your network.

RIPng may have been forgotten, and overlooked for the past 20 years, but that doesn’t mean it can’t still solve problems for small networks (say less that 25 routers) quickly and easily. Sure, you can put in a more complex routing protocol like OSPFv3, but on the other hand, you might want to spend your time just going to the NAS, fire up a good movie, and enjoy the popcorn.

**if you are running a firewall, the default on OpenWrt/LEDE, you will need to put in a rule to accept IPv6 UDP port 521